The Evil Eye : What’s Worth Knowing 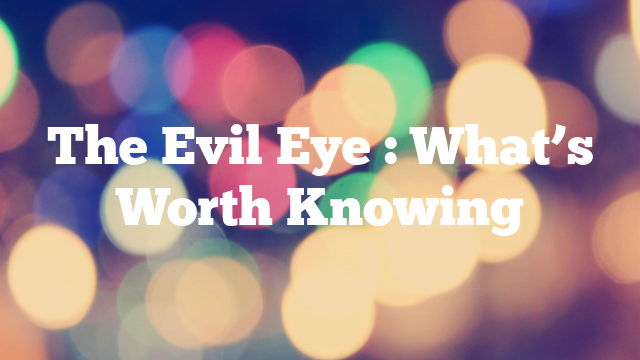 Is your life going badly?

Lack of energy, piling up problems, a sudden and unexpected disease?

You look for the cause in yourself, sometimes even blame yourself for this state of affairs, not knowing that evil came from outside.

You probably didn’t even think that the cause might be an ancient, mysterious force that can bring misfortune to someone with a bad look.

In the era of modern solutions, the Internet, space flights and advanced medicine, it may seem that a evil eye because this article will be mentioned in this article, is only a superstition and not worthy of attention knowledge.

The evil eye, however, accompanied man in different times and cultures.

What to do when we are endowed with a negative gaze, which is nothing else but a bad wish, an energy whose aim is almost literally poisoning human life?

An evil eye – known for a long time

The casting of charms in the past was often associated with illnesses, death, failures, which can multiply at an alarming rate.

In folk-tales, the subject of charming eyes often appears, which have the power to bring about negative events. The evil eye is directly connected with the concept of charm in the culture of European paganism.

For centuries, healers and witches have been removing curses and charms. According to the ethnographic approach to the subject of the bad eye, in the sense of enchantment, it could have happened when:

These witches had their own secret ways of fighting charm.

One of them was (e.g. in case of abdominal pain and shivers) throwing one by one three glowing charcoals into a cup with water. The whole process was accompanied by appropriate spells. This water with carbon was later used to wash the face of the charmed person and then was drunk by him or her. At the end of the whisper, she poured the remaining contents of the cup into the fire and put the cup upside down.

The service of removing charms in certain places in Poland (e.g. Podlasie) is still popular today.

The essence of the evil eye

People with evil eyes often unknowingly cast a spell from their youngest years to their late old age.

But the worst kind of evil eyes were people, who were perfectly aware of their own power and used it at will.

By looking at others with jealousy, regret and dislike, they made the intrusive negative thoughts become a tangible and measurable misfortune of a person endowed with such an eye.

Even the greatest skeptics agree that when we notice a person staring at us, we start to feel a strange and specific kind of anxiety. Who’s the one who’s trying to get us into trouble with an evil eye? He may be a complete stranger who has given us a charm completely unjustifiably, but he may also be a family member, even the closest one. It is enough that there is a negative feeling towards us or jealousy, even the unconscious one.

The first mentions of this can be found already in ancient times and in the Old Testament, but evil eyes appear in different cultures and always refer to the hateful gaze of a … person jealous and wonders badly.

Negative energies sent to the other person in this way are nothing more than black magic, evil spirits circulating in invisible layers of our lives, concentrated power directed at the other person. In a way, the evil eye resembles the voodoo practice of bringing misfortune to a particular person with a material doll. This African-American religion, which is practised in Haiti and the south of the United States, can do a great deal of damage. A doll containing, among other things, the hair or nails of the person we want to harm is pierced with pins, set on fire, etc. This personification of a specific person becomes his mental projection, and wounds and curses, which concern the doll, become reality in the cursed person.

There can be many effects. Responding to a directed bad wish, it can cause health problems, continuous inability to achieve goals, loss of valuable things and even important people. There are skin problems, symptoms whose cause remains unknown, sluggishness, tiredness, drowsiness, nightmares.

With time, problems with work may arise, quarrels among the closest ones, a constant sense of contact with negative energy. “Why does everything go so badly,” we wonder, having no idea that the source of our problems was one bad, jealous look.

It is worth knowing that the evil eye is not only about adults, and the awareness of the charms cast by looking at small children, most often babies, had our mothers and grandmothers. Tiny spell victims in such situations grimaced for no reason, they cry all night and show no improvement.

Among the spiritual messages there was often information about the fact that it is the young children and pregnant women who are most exposed to the evil eye. Most likely, it has to do with the auric field of the child, which is open to other energies, just like his chakras. This condition lasts to about the age of 7, when there is a protective coating filtering negative energies.

An evil eye can affect not only people but also animals or plants. There are often stories that a neighbor praised a nice plant, from which only dead remains were left after a few days. The same applies to animals. An evil eye in a person who really has enormous power can even lead to the death of an animal.

Over time, there may be problems with work, quarrels among loved ones, a constant sense of communing with negative energy. “Why is everything so bad going” we wonder, having no idea that the source of our problems was one, bad and jealous look.

It is worth knowing that the evil eye is not only about adults, and the awareness of the charms cast by looking at small children, most often babies, had our mothers and grandmothers. Tiny spell victims in such situations grimaced for no reason, they cry all night and show no improvement.

Among the messages, information about the fact that it is the young children and pregnant women who are most exposed to the evil eye are often mentioned.

This is most likely due to the child’s auric field, which is open to other energies, as is his chakra. This condition persists until about 7 years of age, when a protective coating filters out negative energies.

An evil eye can affect not only people but also animals or plants. There are often stories that a neighbor praised a nice plant, from which only dead remains were left after a few days. The same applies to animals. An evil eye in a person who really has enormous power can even lead to the death of an animal.

An evil eye in the religions of the world

In the Bible you can find such a quotation:

The light of the body is your eye. If your eye is healthy, and your whole body is clear. And if it’s sick and your body’s dark. So make sure that the light that is in you is not darkness. If your whole body is light and there is no dark particle in it, it will be light as if a candle had shone on you with its light (Luke 11:34-36).

In Judaism, there is talk of a bad look and a bad (devil’s) eye that a person has a relationship with the devil throws at him. Among those who have been most exposed to the negative power of the devil’s eye, children and vulnerable or weak people are also mentioned. It was also believed that an evil eye can be attracted by defiant behaving, carrying on with one’s happiness, attracting attention and simultaneously jealous of the eyes of others.

In Zohar Book you can find a quotation perfectly reflecting the question of a dangerous look.

“A person with an evil eye carries with him a destructive, negative power called the destroyer of the world, people should protect themselves from it, not approach such a person so as not to be injured by it” – Zohar I, 68b.

Also in the Quran you can find content about the evil eye. Even more, in Islamic countries, an amulet is very popular, the purpose of which is to deter the evil eye. It is worth mentioning that the Arabs, who had a bad look, had already spoken before Islam.

“The messenger of Allah advised to do ruqjah (reciting the Quran and using water against body or soul disease) as protection against evil gaze.

Aisha (the wife of the Prophet, one of the most famous women in early Islam) was supposed to say these words.

In Hinduism, buri nazar is said to be an evil eye, and it is a permanent element of culture. Inhabitants of India (both Hindu and Buddhist) fear for their health, their businesses and their homes. Drivers on their vehicles leave warnings about those who would think to throw a bad look at them. The fear of human envy is immense because it is seen as an compelling power of evil spirits that can do a lot of evil.

Also, neo-pagan religions (such as Wicca) are aware of what a bad eye is and how we should defend ourselves against it. It is also worth saying a few words about how the bad eye and the law of attraction and the attraction of happiness collide.

The law of attraction itself, to put it simply, assumes that we can attract with our energy what we want the most. However, this does not change the fact that it is worth protecting ourselves against people who do not share our opinion, are jealous, want our misfortune. At the moment, when we are working hard to make our future look great, a much better idea will be to protect ourselves against the influence of an evil eye. Avoiding people whose negative energy is visible in their deeds, words and attitudes.

The very awareness that we are in the company of such eyes can influence our mood and thus the level of vibrations that we want to attract to ourselves similar events or situations. Lack of negative energy in our lives will increase the vibrations we need to achieve both balance and purpose.

How do you get an evil eye out of your life?

What should we do when we are sure that we have been given a bad look and that our problems will continue to grow? How do we remove charm and cast evil out of our lives? Protection from the evil eye looks different in specific beliefs.

The warnings against casting bad charms mentioned earlier in India, tying red bows on a baby’s stroller, very popular in Poland, or a bath cleansing aura and amulet from bones.

Where do I start?