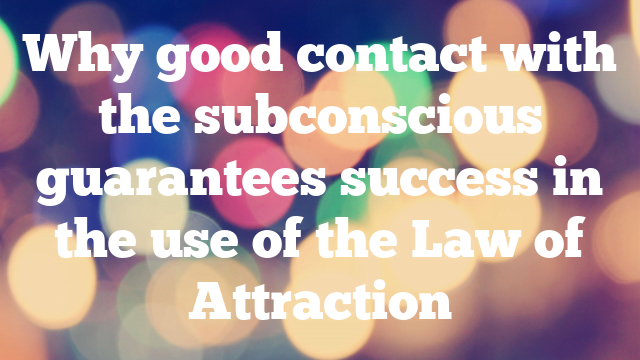 Today I want to show you a model of a man on which almost all spiritual and esoteric traditions are based (in simplification). You will understand why contact with your own subconscious is so important in achieving success in making informed use of the Law of Attraction.

One of the key tasks of consciousness is to act as a “gatekeeper” and to make a selection of ideas to be recognized as truth and to be passed on to the subconscious to integrate. The reason we are programmed with unwanted convictions is that many years have passed before the conscious mind formed enough to be able to perform this function satisfactorily.

The “egg”, which otoczyłem the whole body of our człowieczka, is a representation of the subconscious mind. 83% of thought processes are the subconscious domain. It manages the entire biological machinery of the organism and controls all the infinitely complex life processes, relying on the established patterns of action.

It is the energy generator for the whole human being.

The subconscious cannot think inductively and it all takes to himself (he thinks it’s all about it). In the course of her life, she brought together a plethora of programs resulting from the generalization of individual facts. For example: In childhood, you happened to spill at the table of compote. You heard from your parents that you are niezdarą. The subconscious was recognized by the facts (compote) and the opinion of authority (the parent) that this is actually the case. Now, years later, it still performs a program called “I’m Niezdarą”, proving you are dropping something every now and then.

The subconscious executes the programs, all habits, and habits are in it “installed”.

The speed and ease with which the subconscious learns depend on two factors: the repetition and the charge of emotional (energy) related to a new concept or idea. Hence, one of the techniques of subconscious reprogramming are affirmations (mechanical repetition of some thought until the moment in which wyryje in the subconscious).

A well-made visualization of all senses is a subconscious mind indistinguishable from outer reality, perceived by physical senses.

The subconscious can communicate content from yourself or from the cosmic field of intelligence with the help of feeling, dream, vision, or omens (signs in the real world).

Now the most important.

In the figure I marked a fragment of a larger area where the human being is located.

Different traditions are slightly different to what is outside the subconscious realm, but these differences do not have much influence on the idea itself. The subconscious is in contact either with the superconscious, or directly with the spirit, God, the universe.

Hence the ability to properly convey the information of your own subconscious mind (as well as to protect it from receiving unwanted thoughts) is crucial to your success in leveraging the law of attraction in realizing your vision Dream, desired life.

In the next article, I will try to bring about the fundamentals of proper communication of our subconscious goals so that they can be “passed on to the universal Mind”.