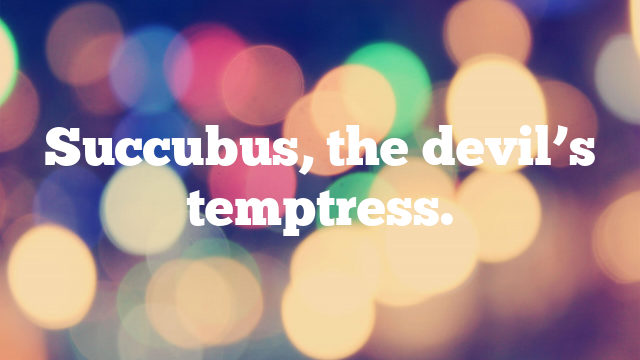 Satan is a perfect liar, manipulator and con artist. He loves to lead people astray, mislead them and laugh at a successful joke, to get them into trouble. The same is true of the demons who, according to the Scriptural tradition, were once angels, but who opposed God and chose to stand beside the most powerful and beautiful of them, Satan. It is also worth noting that succubus, despite its tempting form of an attractive female body, was in fact a male gender. These demonic beings are called incubus when they take on a masculine form, and succubus when they become women tempting men. Incubus are the most fond of communing with living women. Succubi, on the other hand, visited their lovers more often in their dreams.

In demonological literature one can find information that the incubus was an angel who lost everything because of his great desire for a woman. How did the demon become attractive to the opposite sex? According to the records of the demonologist Sinistrari, who dedicated his work to incubation and succubus entitled Demoniality: Or, Incubi and Succubi, demons take on human form, dressing in a way of human corpses (the dead who have recently passed away), which by means of magical spells adapted to their needs and to be as attractive as possible to their future lovers. In the Middle Ages, the memory of succubus and incubus evoked fascination and fear among the simple people, which the Holy Inquisition willingly used to sentence to death for contact with devils not only women suspected of witchcraft, but also simply attractive women who were suspected of being succubus.

According to the rabbinical studies of the early Middle Ages, the Lilith would be the mother of succubus. Older than Judaism itself, appearing in both Sumerian culture and the Bible, the mother of all demons.

According to one of the Jewish traditions, Adam already had a wife before Eve, Lilith (he uses this thread, among others, the 9th century literary work Alphabet Ben Sira, where Lilith escapes from Adam, who only takes Eve as his second wife), who after escaping from Eden became a mother of demons and worked to kidnap children. Lilith is still associated with temptations, prostitution, sexual magic. According to many stories, it is her who sneaks into homes and breaks into the bedroom of lonely men. By seducing them he has all the time stealing their semen, from which are later born creatures that are half human and half demonic. It is worth noting that in one of the most valuable and extensive books on demonology, Malleus Maleficarum (Hammer to the Witches), it is emphasized that Satan highly values his seed and uses it only when he wants to bring to life a new servant or a new servant. Lilith has also found her place in the texts of the 20th century culture.

Often portrayed as a powerful vampire queen, with control over nightmares and sleepy, erotic visions, she commands other succubi and incubi under her authority. Lilith’s animal attribute was an owl. It is also worth mentioning Arath-Lili, Lilith’s servant, whose image differed slightly from the vision of the tempting and outrageous succubus. It was definitely more associated with sadness, loneliness, inability to start a family. Arath – Lili was unfulfilled, she was always a sexual object to men, and her suffering was related to the fact that she was never his true love to any man. She will also not have any friends, children or husbands.

Devil’s seduction or how does a succubus work?

A characteristic feature of succubus is its physical attractiveness. They have been described many times as women who are definitely more beautiful than those who can be found every day. Despite this, the contact with them did not bring much pleasure, and was associated primarily with the feeling of cold. Succubi were also often associated with the phenomenon of sleepy paralysis, where the person attacked by it can not wake up, has difficulty breathing, has the impression that on his chest someone is sitting and does not allow deep breathing.

The Succubi often attacked people who wanted to deceive them by their lust for sin. This was the case with St. Victorine or Hipolit, for example, to whom a naked woman appeared. When he covered her, it turned out that it was the devil in the form of a woman. It is worth mentioning that succubus sometimes promised their lovers not only physical pleasures but also wealth or power. Many researchers of this kind of phenomena emphasize that the connection between the nature of succubus and sleep paralysis suggests that it is a psychological problem and that night visits by mysterious lovers are a product of the mind.

The occultism and broadly understood corporeality of man have many common planes, and the history of black magic and demonology often refers to sexuality. The Succubi were also a huge threat to children. They often felt jealousy towards the men they copulated with at night, so they were sincerely reluctant towards their children from their right bed. Succubi sucked the blood out of the children without any resistance, oppressed them or sent them illnesses. Their power could also lead to a miscarriage or even the death of a pregnant woman, and the greatest attacks could be expected by pregnant women or those who had recently given birth.