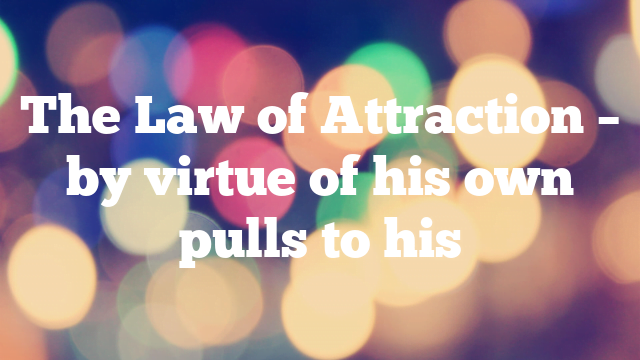 Are you also often miewacie moments when you are excited about the law of attraction? I recently became so sensitive to my thoughts, moods and words – that I attracted much more effectively, and above all, I am more aware of what I should change.

Recently happened me a curious situation. I by train to the house. I felt awful – in an emotional sense. I will not tell you why, because it does not matter. But the significance is that I have decided to affirm intensely love for each other, acceptance, openness to my passions, and in general all of me – the one I am.

It lasted a lot of time – about as much as the train returns from Poznań to Stargard. Although I did not feel sensational at all, even though I was still hard at heart, my thoughts worked in a very interesting way.

Nothing miraculous. I went out of the train with a huge suitcase, going away casually with his affirmations – when I know that my thoughts would be circleding around the negatives – I’m always doing that. Why even more energy that I already give to my dark, pessimistic emotions?

I thought by literally a second of many small things. There were several of them: I looked at the promotion at the exhibition and wanted to buy a dress, I went cream and zapragnęłam the scoop ice cream, I thought I was thirsty, imagined a sister, how to react, when I tell her about what happened and at the end I found that in general it could make me a car disappoint me, because I’m hard.

I went to the store to watch some fatałaszki-I hope that this will improve my humor-and going between the shelves across the sister. Just behind her, emerged a grandmother with whom we always go shopping. She said that the next shop is a dress on the promotion and I was przymierzyła. I was shocked. When I left the store with a new acquisition, Grandma announced that she still jumps somewhere, and I have to go two streets further where she waits for her grandpa-with a car! Going in the indicated direction I was almost gone with my grandfather, who just walked for ice cream! When I returned, cold mineral water was waiting for me in the car.

It sounds too good to truly – but it does.

Then i the power of love.

Therefore, when thinking of success still does not cause a lot of money, or still lack of health despite the crystal clear vision of vitality-add to the mixture a pinch of love. Miracles begin to happen!