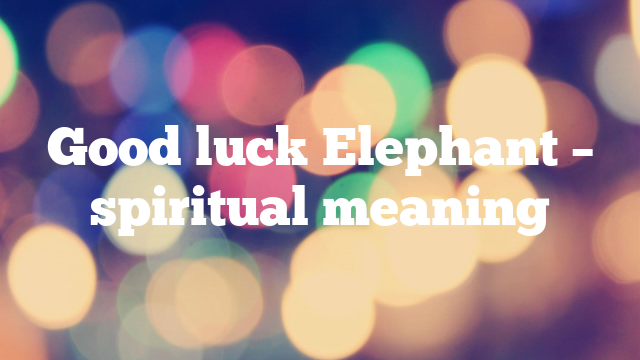 Elephants for happiness – Symbolism of the elephant

The belief that elephants bring happiness has a long history.

Ivory sculptures are popular all over the world. The common superstition is that the elephant sculpture or picture should always be directed towards the door if you want to be lucky home.

It also protects the house when you face the entrance, making sure that only a good fortune passes through it.

Many Asian business owners may have several elephants at the entrance to the building. It is believed that they provide the company stability and wisdom, and thus protect it from disasters.

Like two small elephant sculptures in the hallway in a private home, they will bring knowledge, longevity and success.
Should the trunk be raised or down?

Elephants are lucky. Now there are different opinions, whether the trunk of elephants should be up or down. Some say that if the torso is up, the elephant will shower of happiness on all who pass by it.

The most common is the belief that the trunk must be happy. Some even say that if the trunk is down it is very unhappy for the owner.

Some people think that it is better if the trunk is down, because it means that the sun allows free and natural flow of prosperity in the way of every human being. It’s about the same discussion as horseshoes; Should it be hung up or down?

Now the charm of elephants is becoming more and more popular. They are worn by millions of people around the world as a general symbol of success.

Many believe that a bracelet made of ivory will bring good luck.

Aristotle, an ancient Greek philosopher, claimed that the elephant is superior to all other animals in wisdom. Elephants can show great compassion and express sorrow.

In Hinduism, we find holy elephants. Elephants are animals of some powerful gods. Obviously, the Hindu god of the elephant head called Ganesh is best known.
Airavatam

Indra is a powerful god of Hinduism. He is the god who controls lightning and thunders. Indra is the god of rain and the guardian of the East. He wears vajra, which is the Berlin thunderbolt.

Indra on AiravataIndra is the patron of the god of warriors. He is the leader of the gods of the heavens called Devas.

Indra lives in Svarga, a place in the clouds surrounding Mount Meru. Mount Meru is the golden mountain in Hindu mythology, where all the major deities have their kingdoms blue.

Students join them when they wait for their next reincarnation.

This elephant guards the entrance to Svarg, where Indra lives. Elephants are associated with rain and water.

Airavata is often called the “Sun of Clouds”. This Airavata controls the rain clouds. Airavata is married to an elephant called Abharam.
Erawan – Three Elephant of Three Heads from Thailand

Elephant Erawan is most often shown as an elephant with three heads, called the “three-headed elephant”.

In Bangkok, Thailand, residents of all social groups visit the sanctuary in Erawan to ask for happiness.

This place is occupied day and night. Erawan Shrine The sanctuary is dedicated to a four-person God Brahma who is called God Brahma Than Tao Mahaprom. Four faces symbolize his four great virtues: kindness, mercy, compassion and honesty.

Students come to ask for exams, businessmen come with a request for success in their work, people ask for something they want. You name it, this is the place “go to” to seek happiness in their lives.

If you want, you can pay the dancer for dancing as you like. It can strengthen the positive result.

If the application is answered positively, the person will of course show gratitude. They will return to the sanctuary in Erawan, offering wooden elephants, flowers or food.

Lakshmi, the Hindu goddess of prosperity, is often shown with one or two elephants.

It is associated with elephants and owl. Elephants represent steadfast work, strength, rain and the ability to produce abundant wealth.

Lakshmi is especially celebrated during the Diwali festival.
Queen Maya and white lard

Maya (also known as Queen Mahamaya) was the mother of Siddhartha Gautama who founded Buddhism. She had a special dream.

She dreamed that she was raised in the Himalayas by four ghosts (devas) to a place called Anotatta Lake. There she bathed and dressed in a divine dress.